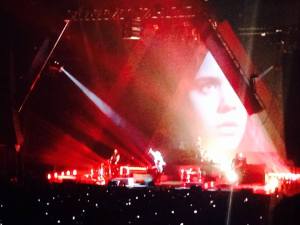 It was only early last year that Bastille was still pushing through the music ranks, launching their first US single, Pompeii, in February of 2013. Their career quickly escalated and, becoming a household name, accepted many invitations to play at music festivals throughout the year.

Not-So-Silent Night, a winter music festival held at the 1st Bank Center every year in Denver, helped to solidify their status in the minds of local Coloradans last December. Bastille was invited to play alongside a recognizable list of popular bands- Young The Giant, Grouplove, New Politics, Saints of Valory, and My Body Sings Electric.

Since then, their popularity has only continued to grow, as was confirmed by the crowd that showed for their concert earlier this week, once again at the 1st Bank Center. Even on a Monday night, it was a near-packed house for one of the more sizable music venues in Colorado. Dan Smith, the lead singer for the band made multiple comments during the performance about how good it was to be back on the stage that helped propel their career.

With a great display of songs from their first album, Bad Blood, as well as two new ones that will be released on their upcoming album, fans were certainly rewarded for bracing Denver’s freezing temperatures and icy roads and making it to the performance. The combination of Smith’s quirky dance moves and phenomenal vocal range made for an energetic and talented showcase for the band. At one point, Smith even walked off the stage and sang while walking through the throngs of people, all around the sides of stadium, and to the back of the crowd, interacting with fans.

He converted semi-believers into die-hard fans, with the showcasing of Smith’s vocal abilities and completely lovable personality. Not to mention that British accent (sigh).  I certainly enjoyed myself, and while I believe they still have room to grow, I am happy to note that I definitely felt that the performance put on by the entire band was worth the time and money. I think that in their next tour, they certainly will not have any issues in selling out this large of a venue again.